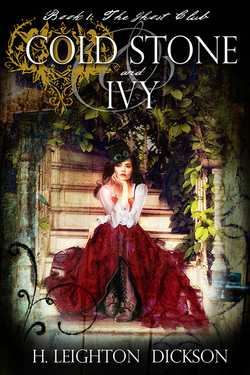 “Jack the Ripper gave her his heart. Now he wants it back.”
​

“I am absolutely in LOVE with this book! I was incredibly drawn to the characters and the world. A gem!"
- Erica Orloff, Illuminated

"Cold Stone and Ivy satisfies cravings for smart humour, detailed steampunk, icy thrills and an honest to goodness who-done-it. Please, treat yourself. You really should."
- West Coast Book Reviews
The year is 1888, the clockwork British Empire is crumbling and young writer Ivy Savage has literally received a heart in the post. Terrified, her father sends her north to a strange sanitarium in Lancashire where the brilliant but unpredictable Mad Lord of Lasingstoke makes his home. Here, Ivy finds the dead are as dangerous as the living and she is swept into a world of manners, mystery and supernatural intrigue, uncovering a secret that will lead both her and the Mad Lord back to London and the dark streets of Whitechapel.

Cold Stone and Ivy is a Gothic thriller, with paranormal elements and a steampunk twist. It uses the timelines and investigations of the Jack the Ripper murders as both a springboard and an anchor in an era that was full of contrasts. Ivy’s world is a conflicted one - the rules and liberalities of Victorian England, the dark alleys and the bright cathedrals, the rush of science and the pillars of tradition. Add to this quirky characters drawn straight from Victorian history, a compelling, conflicted hero and a clever, determined heroine who fails as often as she succeeds, but never gives up hoping for the best in people and takes on everything she finds in her path.

It is “Jane Eyre meets the League of Extraordinary Gentlemen.”

It is ‘The Mentalist’ of Victorian England with character, plot, twist and quirk in equal measure.

​Some books start with a bang. This one starts with a blob of ink and goes from there.
​
"Try not to fall in love with Cold Stone & Ivy. I dare you!"
Buy eBook Now